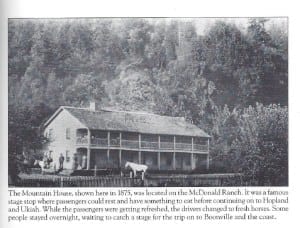 Alexander McDonald was born in 1814 in New Jersey. McDonald came west in 1847 as a Sergeant Major to fight in the Mexican-American War. He was honorably discharged in San Francisco and relocated to the city of Sonoma where he engaged in the mercantile business.While in Sonoma he met Mrs. Anna (Smith) Scott and married her in 1850. This union resulted in the birth of 8 children between 1851 and 1871.

Mountain House was so named because it was at the highest elevation (1,220 feet) on the road between Cloverdale and the coast. It was located at an important intersection of two roads: modern-day Mountain House Road, then known as the Cloverdale-Ukiah Road or the Redwood Highway turned north to Ukiah, while the other branch at the intersection continued west through Anderson Valley to the Mendocino coast. For over sixty years, that portion of the road extending from Mountain House to the coast was known as “The McDonald to the Sea Road”. During the1920s the County moved the road higher up the ridge and re-named it “The McDonald Highway.” Today we know this road as Highway 128.

Mountain House served as a stagecoach stop and rooming house for travelers from points west. (Though technically incorrect, references to North, and South in this chronology assume that Highway 128 runs East and West.) Many travelers were transporting tan bark, sheep, cattle, and crops to the railhead in Cloverdale. Depending upon where in Anderson Valley they started, the trip to Cloverdale would take two or more days.

Upon the passing of Anna (1877) and Alexander (1880) McDonald, Mountain House continued operations under the ownership of their son Richard (Dick) McDonald. The original Mountain House, also known as the McDonald Hotel, burned to the ground in June 1892. A defective flue in the kitchen was the cause of the fire. The loss was in excess of $3,000, however, the property was only insured by Home Mutual for $1,800.

The cows were milked on the south side of the barn, under the shed roof addition. The rock-walled structure behind the house (aerial photo #9) was used to hold milk from the cows in pans so the cream could rise. Once the cream rose, it was skimmed off and the milk was poured into bottles. The barn (aerial photo #7) was the original sheep-shearing shed, surrounded by corrals.

In 1910, Mr. Ed Haehl sold the ranch and house to Mr. E. Bowlen (EB) Hiatt, and his wife Mary. The funds that EB used to purchase the property were proceeds from the sale of the Yorkville Hotel after the death in 1909 of EB’s father Elijah Monroe Hiatt (EM) and mother Elizabeth.

EM Hiatt figures heavily in the story of the naming of Yorkville. There was a card game between EM and Mr. York for naming rights to the area. Obviously, Mr. York won the game, and EM never allowed card games to be played in his house again.

The Highlands portion of the Yorkville Highlands name derives from “Highrollers,” a term used by locals in the Boontling dialect. Men from the Yorkville Highlands area were called “high rollers.” Some informants relate that when these men came to Boonville they wore coveralls over their suits during the ride in and often neglected to roll their suit pants legs down after removing the coveralls. Others say they were “high rollers” in the American slang implications of drinking and gambling. The topography if the area is that of high, rolling hills. Perhaps all the accounts have a mutually reinforcing effect on the term. The building along the creek (aerial photo #10) was added for the Delco plant, a generator that provided light for the home. A laundry room with a stove to heat water, a washing machine, and two tubs for rinsing were also located in this building. The clothesline hung just outside. 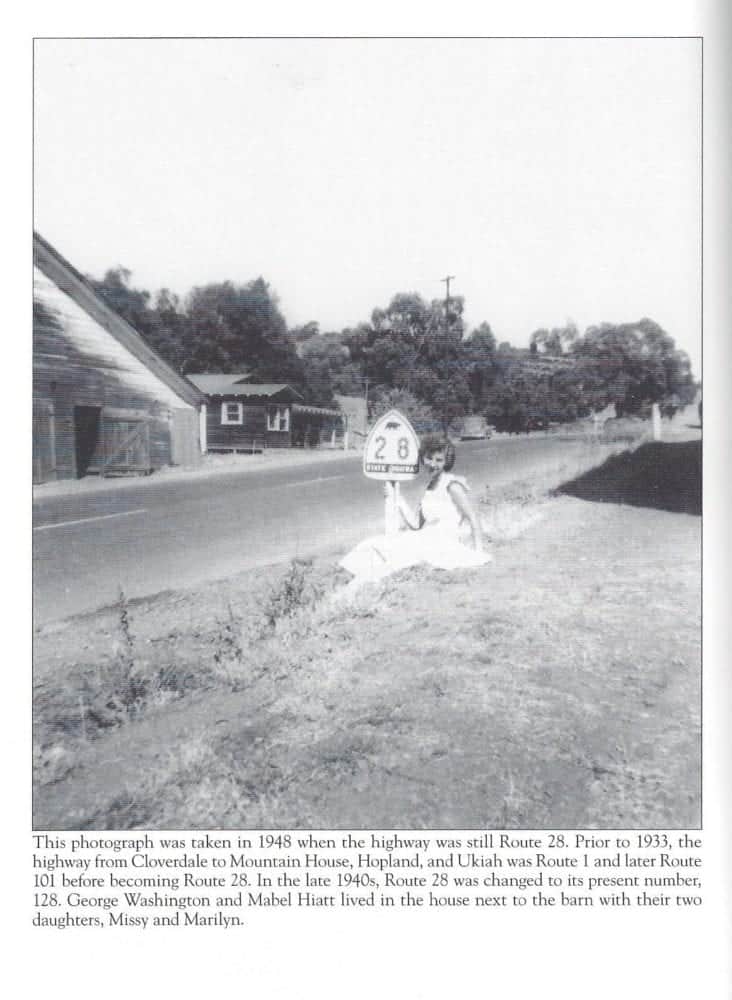 GW Hiatt would rent out deer hunting rights on the property to various people, and they used the “skinning shed” (aerial photo #6). When the pond was built (after 1972) the shed was demolished and the present cottage was built. In front of one of the current cottages (aerial photo #4) stood a large redwood water tank that captured spring water for use on the property. It was demolished in 2012.

Upon his graduation from Cloverdale High School in 1923, GW set about building a gas station on the north side of Highway 128 opposite the Victorian house. It was located in front of the present-day yellow house at 39000 Hwy 128 (aerial photo #11), which had not yet been built at the time.

“This was the Mountain House Service Station 8 miles out of Cloverdale on what was then Highway 101. The station closed when River Road was completed between Cloverdale and Hopland and the highway from Cloverdale to the Mountain House became what is now Highway 128. The road from the service station to Hopland has now become Mountain House Road and is a county road. This picture was taken before my parents were married in 1930. Dad ran the Service Station as well as the ranch at that time. When I was about 5 years old in 1936 on of my first jobs was to pump gasoline into the gas pump.” –Marilyn Hiatt

GW built a small house near the gas station on the north side of Hwy 128. Originally it consisted of a kitchen, bathroom, and sleeping porch. GW Hiatt added a front porch and office to the home in the 1940s. GW married Mabel and they raised two daughters, Marilyn and Mabel (Missy) in the house. Currently (2016) painted yellow and known as 39000 Hwy 128, the house is now owned by Greg and Marti Lawrence.

Besides operating the service station, GW worked for the County using a horse drawn grass cutter to cut the grass on the sides of the highway, and as a lineman for the County maintaining the rural (party) telephone lines. Neither of GW’s siblings had any children.

On the north side of the highway, to the west of the home built by George Washington Hiatt, there was a large barn (aerial photo #12). This barn functioned as a stable for the horses, and housed their hay, tack and coaches. Marilyn Hiatt remembers this barn fondly as a play area. Behind the barn was a pasture for the horses. A picture of the barn was taken by Wes Smoot in May 2011. The barn fell down only weeks later. Aerial photo #6 indicates the original location of the hired hands’ cabin.

Marilyn and Missy Hiatt attended Gaskill School in its original location. In 1944 Marilyn graduated from elementary school and continued her education at Cloverdale High School.

In 1936 a new stretch of Highway 101 was opened. The Cloverdale-to-Hopland bypass follows the Russian River. With traffic re-routed, business suffered, and the Mountain House gas station was closed.

During the years of WW II, one of the hired hands was drafted into the Army. Ed Haehl’s son, Eddie, who helped GW Hiatt around the ranch, went into the Air Force. It was during this time that Marilyn Hiatt stepped up and began driving teams of horses, milking the cows, and helping with general chores. Although she was able to drive a team of horses, Marilyn didn’t learn to drive a car until age 40.

When Marilyn was just 13 in 1945 she helped her father build two more bedrooms at the back (east side) of their home. Years later, after the Hiatts sold the property, the porch was enclosed.

At 18 years of age (1949), Marilyn Hiatt married and moved away from the property. Marilyn’s two children would come to visit their grandmother Mary at the Victorian house, and on at least one occasion, stayed the summer.

The Hiatts sold the ranch in 1972. The eastern portion was sold to the Living Communion Church, and the western portion, including the Victorian house was sold to Realtor Jim Johnson. Mr. Johnson subdivided the land and resold the parcels.

Information Was Gathered From

An Anderson Valley Journey, Then and Now by Wes Smoot and Stephen Sparks