10 Interesting Signs Your Boyfriend is Going to Propose to You

How do you know they are going to propose? Find out here.

Whether you’ve been dating for five months or five years, you’ve likely thought about your future together with your partner. And while some couples are more upfront about getting engaged, others are a bit more old-fashioned and try to keep it under wraps until the question is popped.

How do you know when your boyfriend is going to propose?

So if you’re wondering if your boyfriend or girlfriend is going to propose to you, read these 10 telltale signs that it might be sooner than you think.

1. He starts asking you more about your future together.

If your significant other (SO) is asking you:

Then it’s pretty clear that they have definitely considered popping the question. 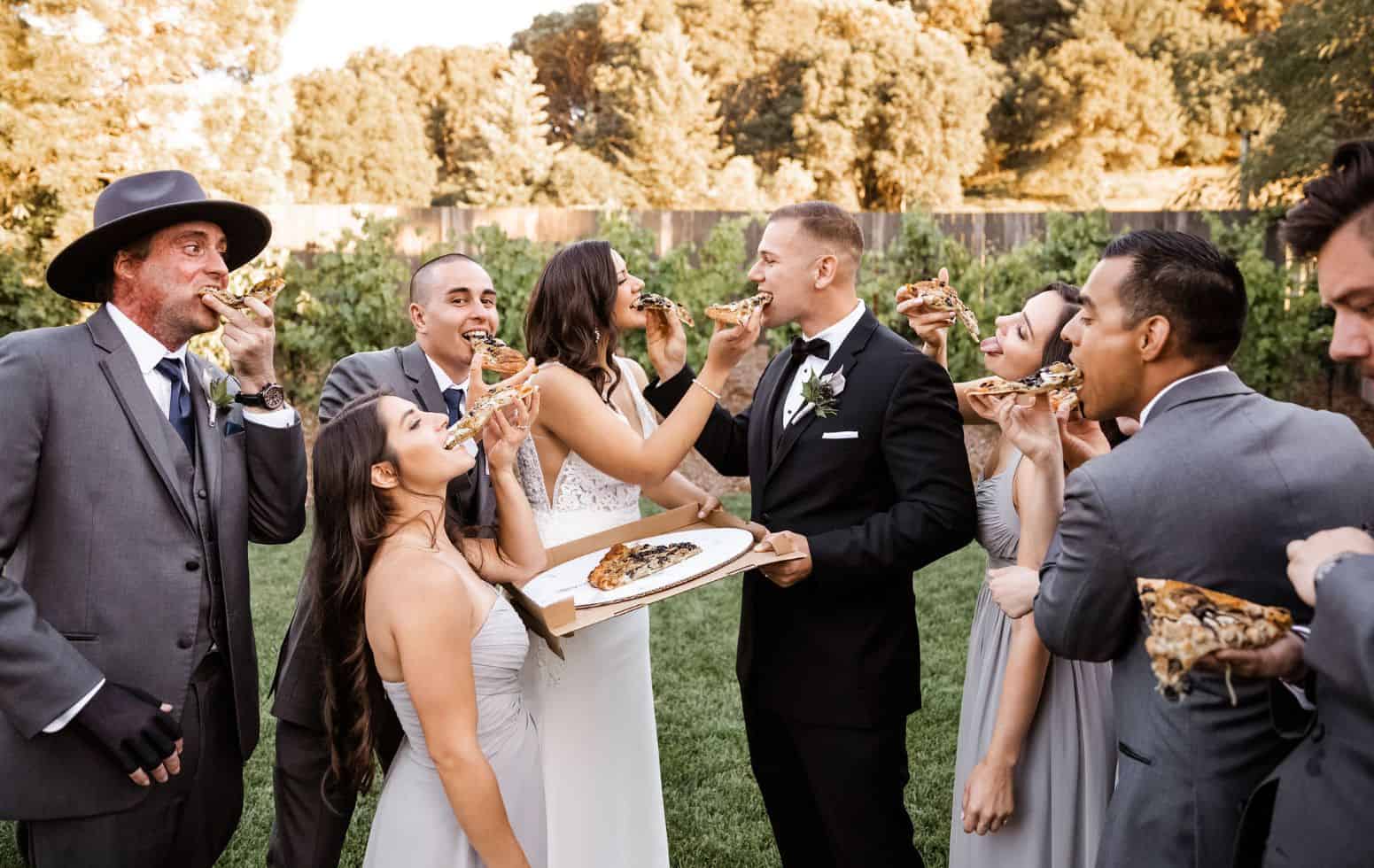 “Eh, I’m just looking forward to the free food and open bar” – a phrase uttered by boyfriends all across Northern California and probably the world. But then out of nowhere, your boyfriend is suddenly excited to go to your friend’s wedding…for reasons other than food and booze.

Then he is likely thinking about a wedding of his own, with you, in the near future. This is a great sign that he is going to propose. 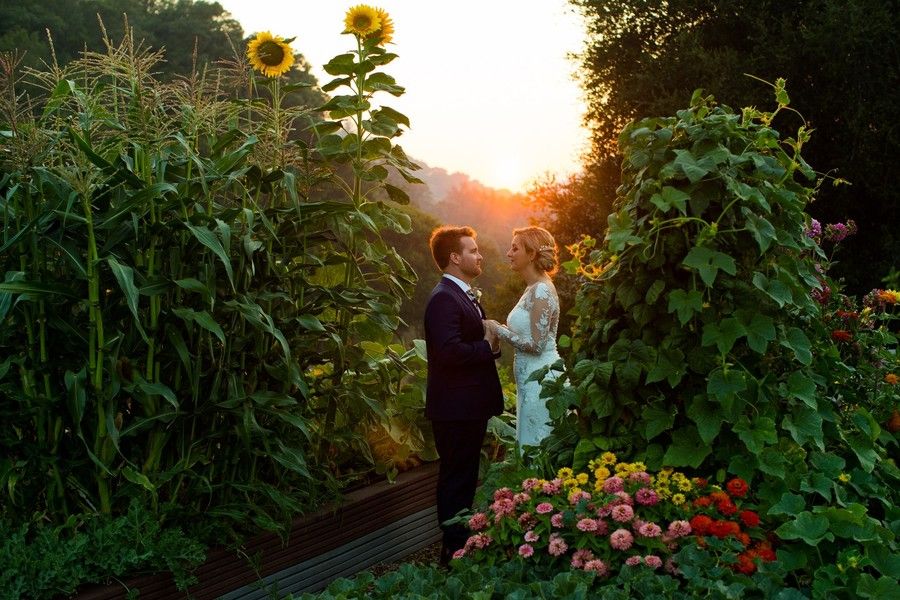 3. He’s acting super nervous around you.

If you’ve noticed that your boyfriend is starting to act more nervous around you, he’s probably panicked and thinking about popping the question soon. Women have a natural intuition and we can always pick up when our man’s personality or demeanor has changed.

If he’s acting nervous, it’s likely because he’s feeling super vulnerable. So if you notice him acting nervous, go extra easy on him and cut him some slack. After all, he wants to spend the rest of his life with you. 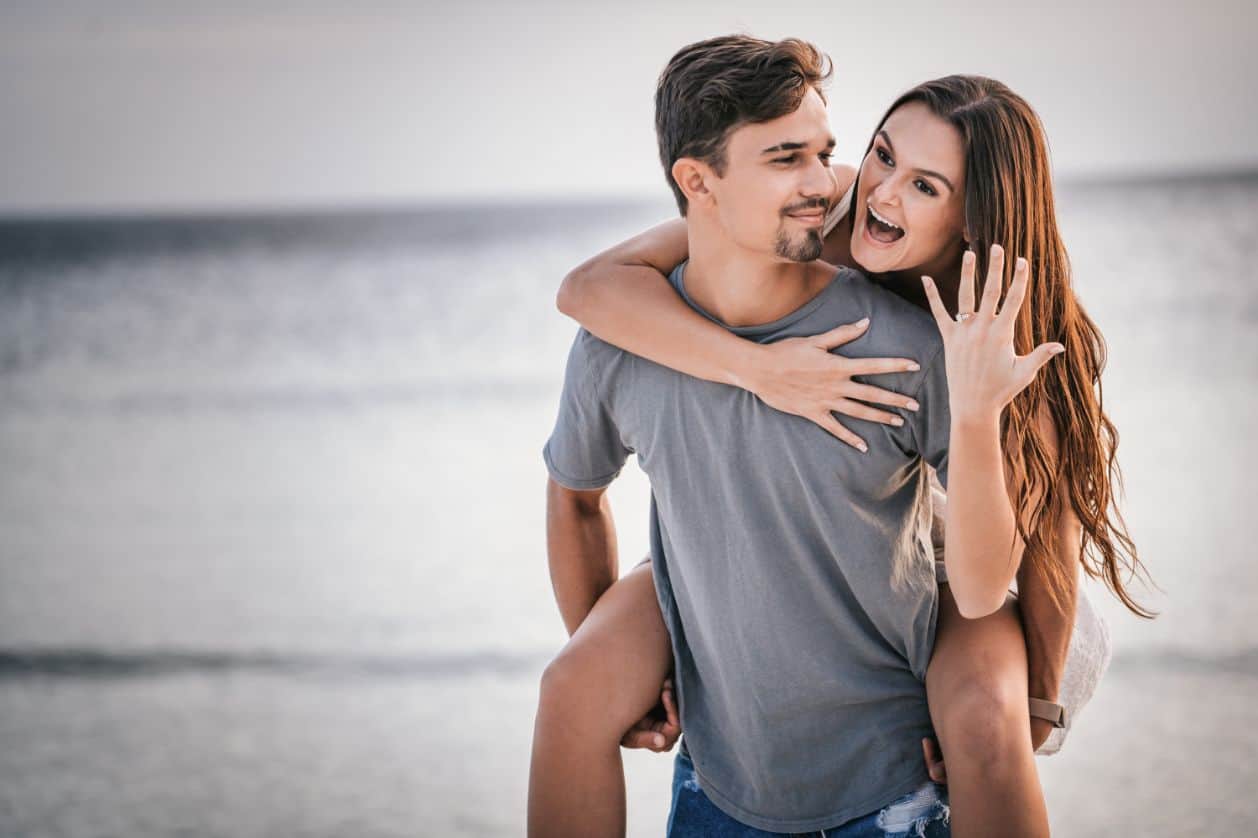 4. He’s hiding his cell phone from you.

Sure, this could be malicious, but hopefully, you both trust each other enough to not worry about things like that.

If he’s hiding his cell phone from you, he’s likely hiding a number of things including:

So don’t fret if he’s acting a bit more clingy with his phone. He probably doesn’t want to ruin the surprise that he is planning to propose.

5. He starts putting the toilet seat down.

OK all jokes aside, if your man is starting to act more “domesticated,” he probably wants to show you that he is worthy of sharing a home with for the rest of your lives.

He’s likely only going to pop the question if he’s certain that you’ll say yes, so he wants to do everything in his power to prove to you that he’s worthy of your love and affection. And yes, this may include making the bed or helping with laundry. 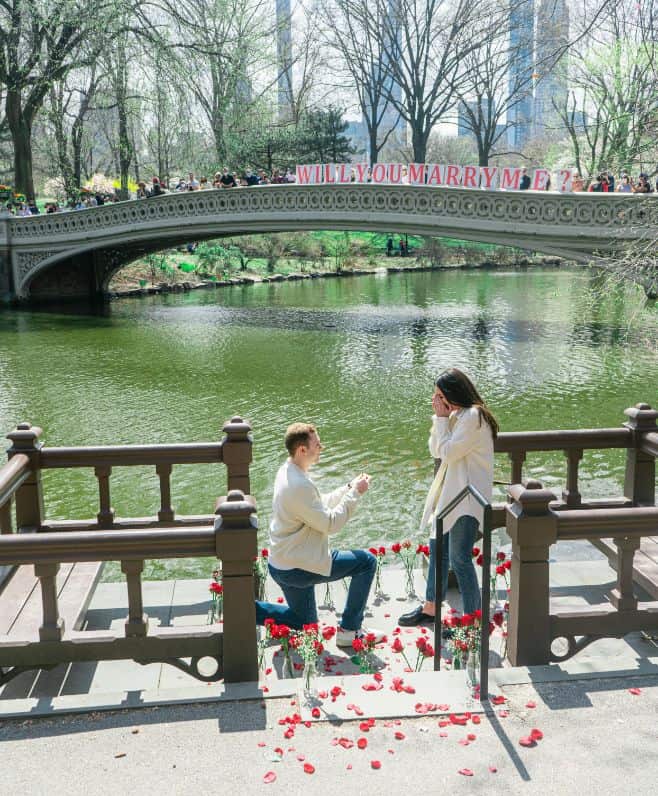 6. He starts spending more time with you.

Maybe “Saturdays are for the boys” just isn’t a thing for him anymore. If he’s cuddling up to you on the couch more, wanting to spend more of his free time with you and tossing away other bachelor activities (maybe he trashed that Mad River – Steelhead Extra Pale Ale poster finally), then it’s possible that he’s ready to make some other significant changes in preparation for spending the rest of his life with you. 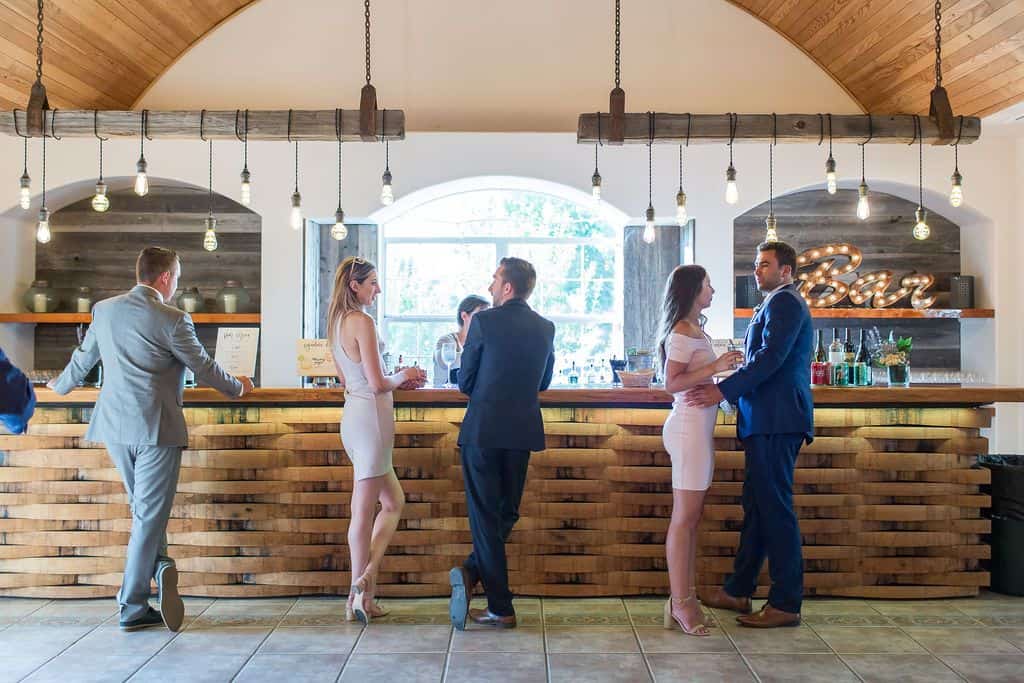 7. He’s talking to your best friend, sister, or mom.

If he’s chatting with someone close to you, he’s probably trying to gauge a few things:

So if he becomes buddy-buddy with your mom, dad, or a close friend, it’s likely that they’ve already had the talk.

8. It’s close to your birthday, a holiday, or an anniversary.

If you two have a special date including your anniversary or another celebration, he may want to celebrate that with a proposal. It’s also very common to be proposed to on:

So keep that in mind when these special dates approach.

9. You find him snooping around your jewelry box.

This one’s pretty obvious, but if he is trying to find sneaky ways to figure out your ring size or determine your style, you can be pretty certain that he’s definitely going to pop the question.

If your favorite ring magically disappears, it’s officially okay to start searching for venues and designing invitations – marriage is on the way!

P.S. Do you love pearls? Check out why a pearl engagement ring may be a perfect fit for you! 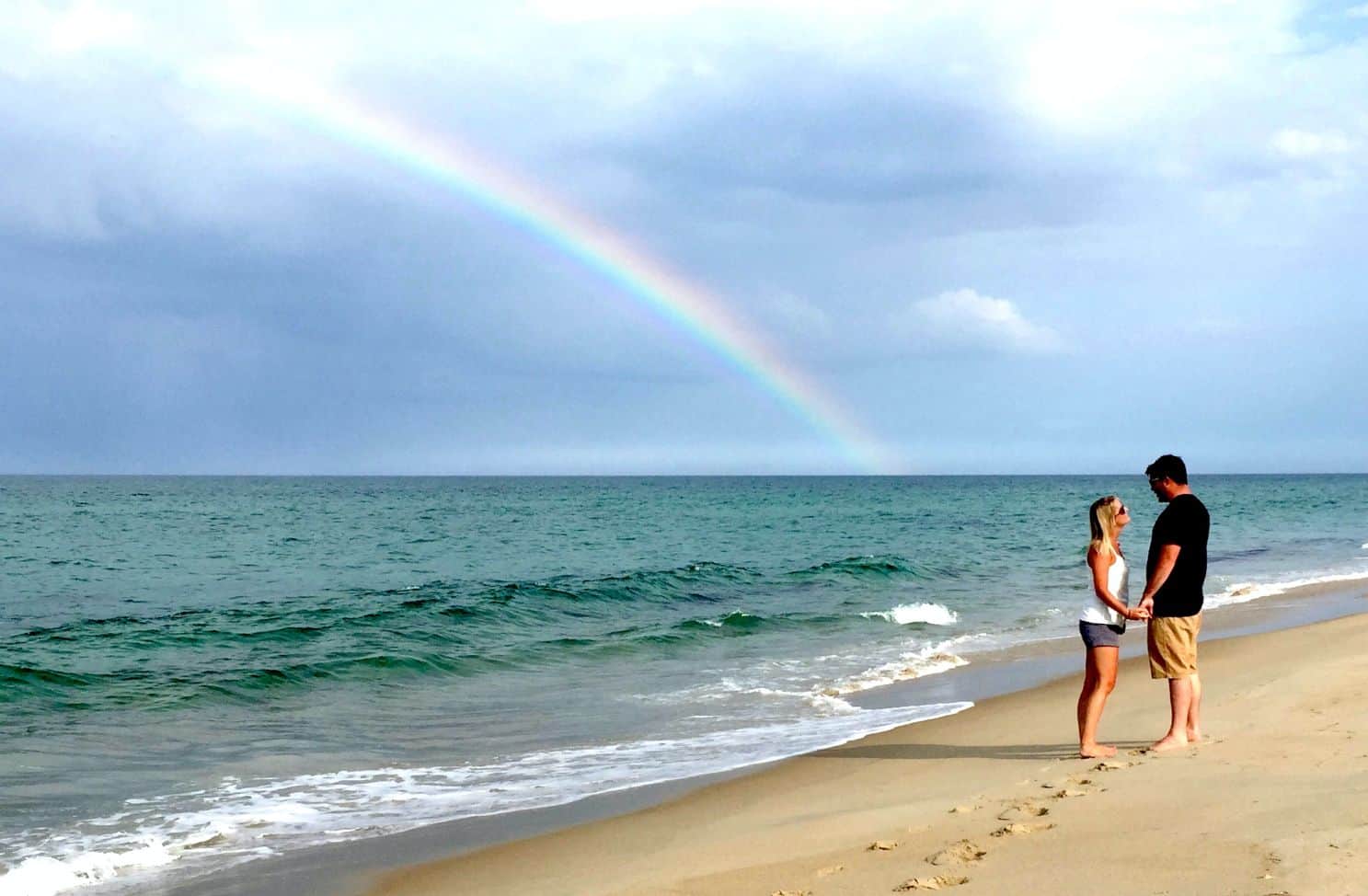 10. He plans a surprise romantic outing.

This is possibly the most telltale sign of all that he is going to propose, especially if he’s vague on the details.

A romantic weekend on the Sonoma Coast? A reservation at an exclusive restaurant in Wine Country? A surprise rendezvous to a special place that holds meaning to both of you? It’s pretty much in the bag. 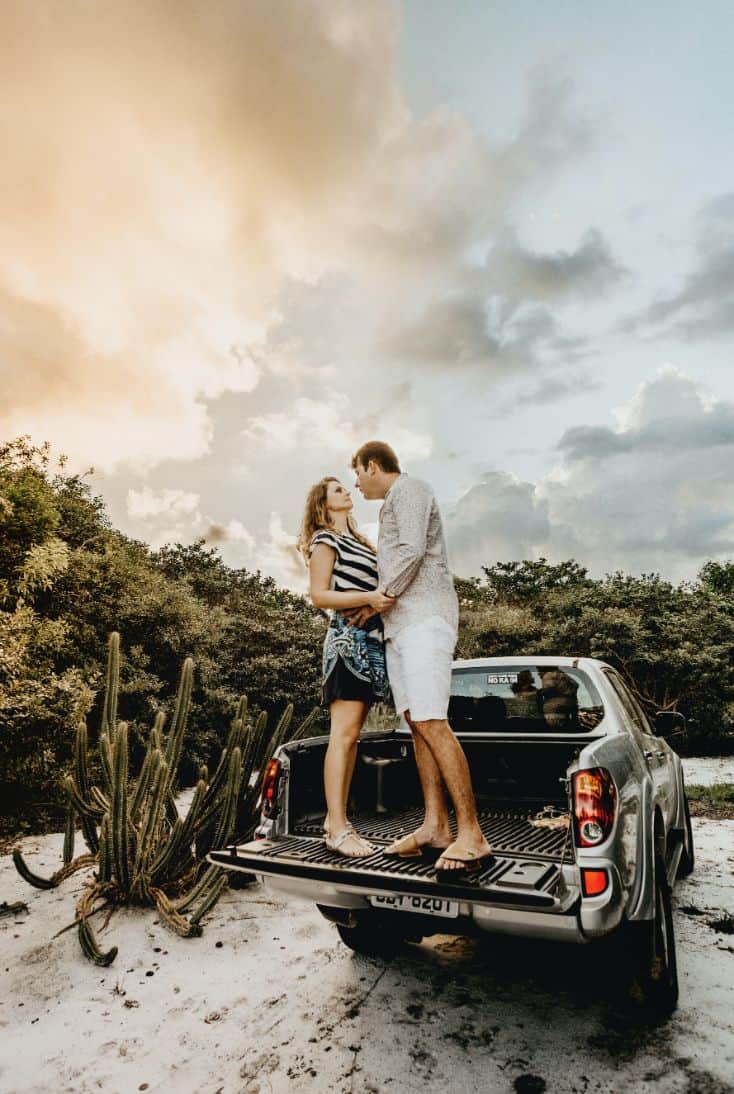 10 Interesting Signs Your Boyfriend is Going to Propose to You

7 Creative Ways To Display Wedding Hashtags On Your Special Day

(QUIZ) 20 Questions to Plan Your Wedding

Questions to Ask a Venue Before Taking a Tour

7 Ways Your Wedding Can End Friendships

The Pros and Cons of Children at Your Wedding

Choose an Event Location that is “Venue Only”

Part 3: The Ultimate Wedding Planning Checklist (The Final Week to After Your Wedding)

Still not sure if he’s going to propose? Here are a few more signs that he is going to pop the question.

Your boyfriend is looking at you in a new way. He sees the love that is already there and he is filled with gratitude for all of the little things about you. You are his best friend, confidante, partner, lover – so much more than an idea or infatuation to him now.

He is showing off your relationship by introducing you as “my girlfriend” instead of just saying “this is my girl”. It’s not something he does casually or without any intention behind it; this is big deal to him because he knows what it means to be proud of someone who deserves that title.

You’re on vacation together somewhere romantic, just the two of you. This might be a dead giveaway, especially if his suitcase is tucked out of sight from you!

For Christmas or your birthday, he gives you something meaningful to both of you: matching rings (or other jewelry), some kind of special anniversary gift like an engraved watch together.

Whenever he has an idea, he asks if you have any opinions on how best to do it which shows that this relationship is important enough for him that he wants your input into decisions – even small ones!

He is constantly reminding you of how much he loves you. He lets you know that it is not just a feeling for him – but one that is deep and lasting, as well as true.

If your partner is an almost perfect match for all the qualities that are important to you, it’s a good sign. If they don’t have any major flaws or deal-breakers such as being too cranky for example, this could be a very strong indicator that marriage is on their mind too.

Your boyfriend is giving hints about his feelings towards commitment – whether subtly or not so subtly but hasn’t proposed yet. This is often the best way to get some insight into whether there’s something going on inside his head and he’s thinking about long-term commitment.

He is really acting like he is in a committed relationship. A lot of the time, people will start to behave differently if they are feeling serious about someone – and this could be as simple as picking up your clothes when you drop them on the floor or doing more household chores together rather than it just being one person always contributing.

He is always telling you how much he loves and adores you. He is constantly showering you with words of love, care, kindness, and affection in both verbal and nonverbal ways.

You’ve been with each other long enough now where maybe marriage has come up in conversation before…you have talked about what would need to happen first if you were going to get married! You might also notice that there is no talk about “what if” anymore when it comes to being together forever.

He tells you he loves spending time with you.

He tells you more than once (or twice) per week that he loves spending time with you; it might seem small but if he wants to share this with you, he definitely wants to share his future with you.

You enjoy hobbies together.

If you have been together for a while and not just started dating, he is willing to spend his time or money on your hobbies. If you are into cooking, he might take the day off from work so you guys can go grocery shopping together; if art is something that is important to both of you then maybe he will offer up some paintings or sculptures as gifts

He shows you his love through gifts or sweet sentiments.

He does thoughtful things every week: leaves love notes in random places around the house (maybe even when one of you is out), surprises you with small gifts when you least expect it – like flowers delivered at your job unexpectedly. These gestures show how much thought and effort he wants to put into your relationship.

Some of these things may not be a sign that he is planning to propose, but they are definite signs that he is into you and wants the relationship to work. And if his intentions turn out to be different than what is expected, then at least there is some happiness in knowing it was a fulfilling experience for both parties.

If these gestures come more often or become more elaborate, then this could signal an engagement ring coming soon!

How long before a man knows he wants to marry you?

Some men wait until they’re sure you are the one for them – they don’t want to risk wasting time on someone who is just “good enough.” Others might make a proposal decision after only six months. Make sure you don’t feel rushed and it’s not awkward. you can always ask if he is planning to propose, directly to him, or his friends and family.

If you are wanting your man to propose marriage to you quickly, the best way to do it is to inspire him to make you his one and only. Click here to learn how to get him to propose and marry you without looking low value.

What do I do after I’m engaged?

If you’re opting for an all-inclusive venue, you may consider the rustic elegance of Mountain House Estate. That’s because we offer California wedding packages that are completely customizable and don’t have any scary surprises or hidden fees.

7 Creative Ways To Display Wedding Hashtags On Your Special Day

Do you want the best chance at a healthy relationship? The best way to guarantee that is to transform yourself and move past your most painful memories. Stop attracting the pain and hurt of your past and manifest your best future.